Jason and Stacy,  also know as The Alans;  are a husband and wife magic duo who live in Northeast, Ohio.  They've entertained countless audiences in the greater Cleveland area with they magic and mentalism for over 15 years.  From performances at venues such as; The Rock and Roll Hall of Fame, Key Tower,  to private performances for the Browns and Cleveland Cavaliers.  What makes their show unique is their ability to provide two shows in one!

You may have seen Jason performing around Cleveland at various functions from fundraisers to popular restaurants such as TownHall in Ohio City.  Jason is a seasoned sleight-of-hand artist with over 20 years of performing experience. He combines his knowledge of magic with his understanding of situational comedy to provide an unforgettable encounter.

Prior to becoming a mentalist, Stacy Alan worked in the Cleveland and Akron area as a mental health therapist.  Eight years ago she decided to join Jason on the road. Jason introduced her to the stage as an assistant but the duo quickly realized she could take on a main role. It became obvious that her background in psychology would make for a fun character; that's when Stacy began studying mentalism.

The Alans combine their skills in a show they call, "In Cahoots, an Evening of Magic and Mentalism with The Alans".  When they're  not touring the country, the duo calls The Alex Theater located in the beautiful Metropolitan at the 9, in downtown Cleveland, their home stage.

Headline Entertainment brings the room together for an interactive and unforgettable. show experience. The Alans mind-blowing magic and quick whit will leave your guests wanting more. When it comes to finding entertainment in Cleveland, The Alans are the reliable choice. They will work with you every step of the way.

The Alans have worked with top Cleveland organizations including Progressive Insurance, Parker Hannifan and Rocket Mortgage. They offer custom entertainment packages to meet your event agenda needs. When you're in need of high energy, engaging and clean entertainment, The Alans are your number one choice!

” Learn More About The Alans ”

"The Alans are FABULOUS!!! They performed table magic at our Make-A-Wish Ohio, Kentucky & Indiana Central Ohio, Hope is Essential Gala on May 14, 2022. They engaged our guests during our cocktail hour and our unofficial after-party following the program. Our guests were amazed by their magic and mentalism. Many of our supporters asked us to bring them back for future events. The Alans are the best! Kind, thoughtful, and of course, perfect at what they do! BOOK THEM! Don't wait! They will be great for any event you have. Thank you, Stacy & Jason! Can't wait to do it again soon!"

One thing we can say about us is that even after all of these years we still have a passion for performing. When it comes to working our magic around Cleveland, we take pride in delivering a show stopping performance.

Stacy visited Jason while he was working on a cruise ship in 2011.  He convinced her that they would be performing a trick.  She had no idea he would propose to her.

Stacy left her job in 2014 and began working alongside Jason.  Before combining their shows, Jason and Stacy worked on their individual expertise.They wanted to  make sure they had something truly unique to offer. 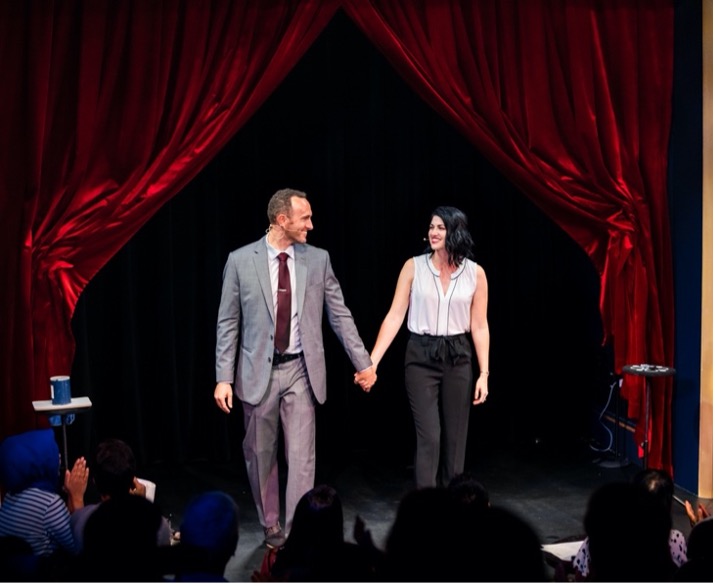 In 2021 Jason and Stacy competed on the national T.V. show, Penn and Teller Fool Us in hopes of fooling two of the world's greatest magicians.